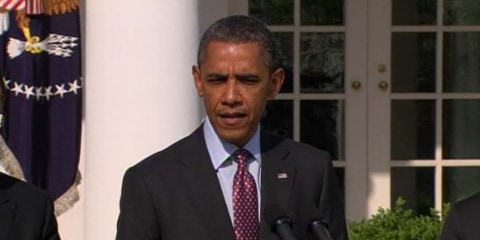 Obama commented on the Trayvon Martin case today in the Rose Garden:

"I think about my own kids. and you know, I think every parent in america should be able to understand why it is absolutely imperative that we investigate every aspect of this. and that everybody pulls together, federal, state and local, to figure out exactly how this tragedy happened. so I'm glad that not only is the justice department looking into it, I understand now that the governor of the state of Florida has formed a task force to investigate what is taking place…My main message is to the parents of Trayvon Martin. You know, if I had a son, he would look like Trayvon. and, you know, I think they are right to expect that all of us as americans are going to take this with the seriousness it deserves and that we're going to get to the bottom of exactly what happened."

In related news, activist and writer Zach Stafford writes, in the HuffPost, about everyone's civil rights movement, how they relate to the Trayvon Martin case, and why LGBT people should be involved:

Trayvon Martin's story is a tragedy, but we need to look at this instance and see it as a battle on a few levels. On one level it is a battle for justice for the Martin family, who rightly deserve it, and on another level it's also a battle for all folks who face violence when being in public — even gay folks. Although I can never say that "I Am Trayvon Martin!" (even though I do understand that protesting tactic), what I can say is that I have been in the "wrong" place and policed by folks who live in that place far too many times just for looking "suspicious" (translation: not white, not heterosexual, or not what is thought to be an upstanding member of that place). And I believe many of the gay folks in the world could say they have to been thought of as suspicious — suspicious for being gay…