The AP profiles Evie, President Obama's transgender former nanny, who lives in a slum in Jakarta, Indonesia. Like most of the trans population there, Evie is treated as an outcast. Here's part of the post which deals with an earlier time in her life when she was a sex worker: 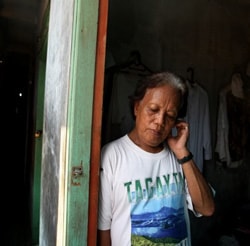 The raid that changed everything came in 1985. She and her friends scattered into dark alleys to escape the swinging batons. One particularly beautiful girl, Susi, jumped into a canal strewn with garbage.

When things quieted, those who ran went back to look for her.

"We searched all night," says Evie, who is still haunted by the memory of her friend's face. "Finally … we found her. It was horrible. Her body swollen, face bashed in."

"I don't have a future anymore."

She says she didn't know the boy she helped raise won the 2008 U.S. presidential election until she saw a picture of the family in local newspapers and on TV. She blurted out that she knew him.

"I couldn't believe my eyes," she says, breaking into a huge grin.
Her friends at first laughed and thought she was crazy, but those who live in the family's old neighborhood say it's true.

Evie said Obama was 8 (she met their familiy in 1969 and began work after his mother was impressed with her cooking): "He was so young," says Evie. "And I never let him see me wearing women's clothes. But he did see me trying on his mother's lipstick, sometimes. That used to really crack him up."