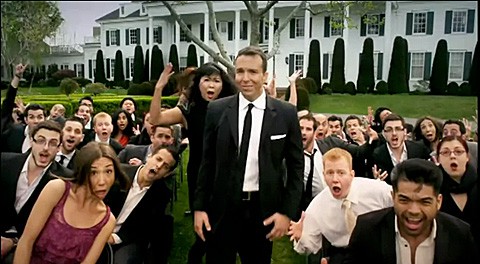 My friend Danny Rose made this amazing video of a song he wrote to propose to his boyfriend Aaron. Danny's not in the music business but when he told friends he wanted to make it they volunteered. 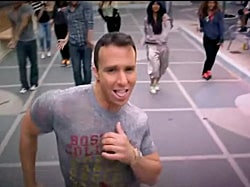 I started writing the song in December and took me a month to complete. Then I prepped the music video for a few weeks and shot it all in one day at the culver studios. I had everything donated from techno crane to cameras and fx. I had a killer director, DP, editor and choreographers all who volunteered their time and amazing talents. I spent about a month in post.

The funny thing. Very funny thing… Is that Aaron was planning to ask me !! He actually beat me to the punch and devised his own proposal adventure for me on Valentines day!  I was in the midst of prepping the video!  I said yes but told him I was still going to ask him and continue my plan!

I presented the video in the backyard.  When he saw the screen he thought I made a slide show of our lives together!

After the video I got down on one knee and asked him to make me the happiest person in the world and spend his life with me!  He said of course and it was a great moment.  But wanted to watch the video again 30 more times. There are a lot of inside jokes and even some wardrobe choices in there designed to experiences in our history.

Danny has put the song up for sale on iTunes and is donating 100% of what he makes on it to marriage equality charities. He added this to his explanation of the song there: "I just wanted to do a project for my proposal that was a mixture of music and comedy which is very much the way we live our lives."