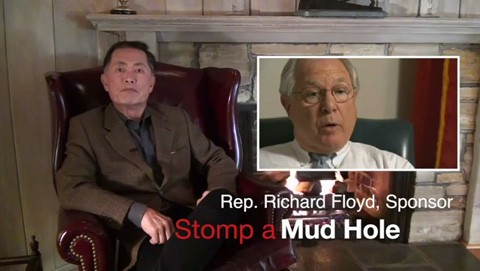 Earlier this week, George Takei put out another funny video in his campaign against anti-LGBT laws in Tennessee, which advertised the sale of his "It's Ok to be Takei" T-shirts, proceeds from which appear to be going to the Old Globe theater in San Diego.

Jonathan Cole, President and Chair of the Tennessee Equality Project wonders why they're not going to fight the legislation there.

I am a lifelong fan of your work. As a gay man, I was inspired by the ideals expressed in the Star Trek series. When I learned you were gay, it enriched that experience to Warp 10 for me. I am serving my third year on the board of the Tennessee Equality Project. My organization has fought against the Don't Say Gay bill for six LONG years. It's the bill that seems to never die. TEP is the boots on the ground here in Tennessee fighting this onerous bill. I am thrilled to hear that you've lent your name to fighting against this bill, but I am curious: to which charities are you forwarding the proceeds of your sales? Are you reinvesting those donations in TN to fight the anti-LGBT legislature in Tennessee? Since Tennessee Equality Project is the lead organization in fighting the Don't Say Gay bill in Tennessee, I've wondered when we might hear from you or your organization. We at TEP would love to help you put proceeds of your work to good use at the source of the problem — right here in Tennessee. I'd love to talk more about this with you. Perhaps, we can both plot a course for equality here in Tennessee.

Added Porter: "I'm not aware of the Old Globe theater engaging in the fight for equality and safe schools in Tennessee."

Takei's video, reposted AFTER THE JUMP…

Tennessee Lawmakers: We Need To Chat from Allegiance – A New Musical on Vimeo.