Mexican transgender activist Agnes Torres was found dead this week outside her home in Puebla, Mexico. Her neck had been slashed, her body burned in signs she had been tortured. 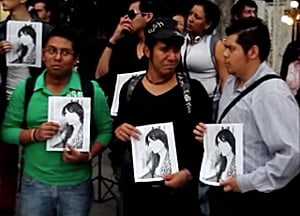 “We condemn this crime against a woman, an academic, a psychologist, educator, role model and activist for human rights for women in general and for sexual diversity as a whole,” the Puebla-based organization Vida Plena Puebla. “We are distraught, pained, enraged and saddened by this crime, and feel powerless over how, yet again, a brave person has succumbed to the most brutal of gender-based violence… in this case, violence against a transgender woman.” The organization demanded in their statement that Torres’s murder case be treated the same way as that of “the daughter of any governor, politician, or attorney” and that it be solved swiftly.

The 28-year-old psychologist, educator and human-rights advocate had been leading the march for acceptance for trans folk in her native country.

News of Torres’ death spread quickly among LGBT activists in Mexico: On Monday, close to 2,000 people congregated outside Puebla’s civic plaza, seeking justice and demanding the murder be classified as a hate crime. Onán Vázquez Chávez, president of Vida Plena Puebla, a local LGBT group, told CNN Mexico that violence against queer individuals should not be treated as “crimes of passion” when there is clearly a “luxury of rage” involved.

Torres' murder is the 6th murder of an LGBT person this year in Puebla.

Watch videos of the vigil for Torres and news reports, AFTER THE JUMP…