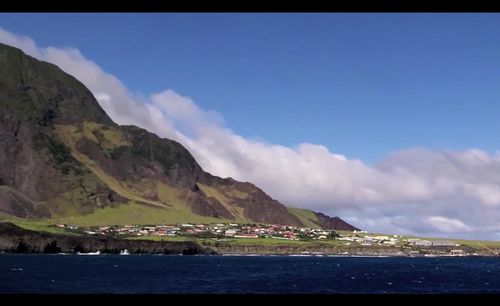 This isn't gay-related at all — it'll be a long time before there's a GLCC on Tristan Da Cunha — but it's rather fascinating. Tristan is a small volcanic island in the southern Atlantic more than 1,500 miles from the nearest inhabited land, which happens to be South Africa. (Wikipedia says it's 1,750 miles. Anyway, it's far.) Tristan's been continually occupied since 1816 — initially by British marines, who were gradually replaced by a population of civilian farmers. The island is now home to approximately 300 souls, all subjects of the British crown. Tristan's got one police officer, one doctor, a goodly number of goats, and no airstrip: Travel to and from the island is by boat, and even that's often impossible due to regularly inclement seas.

It's got problems. Severely injured people must be rescued by fishing boats and brought to Cape Town. Children are educated only to the age of 15, and a decline in demand for Tristan's primary export — crayfish — means there's little money to improve the island's educational capacities. And the society's more-or-less closed to new members, which causes some genetic trouble.

But — man! The island's flagrantly, ostentatiously beautiful, in that same vulcan, treeless way that Iceland is beautiful. And its people seem lovely. Andrew Evans, a "National Geographic Traveler," visited the island this month and recorded the following brief video essay, viewable AFTER THE JUMP …

(Also worth noting: Andrew Evans has lately shot a video of baby seals being "fierce." The guy's got a fun life.)