Jennifer Tyrrelll, a Cub Scout den mother in Ohio, was dismissed from her position last week after local Boy Scout officials learned she is a lesbian.

Tyrrell served as a den mother for a year, but when the local district council learned of her homosexuality, they told Tyrrell she had to leave her den leader position.

"I feel like I've had a great year, I've bonded with my parents, my children, we've done a lot of really good things.  And in light of other circumstances, it was brought to the council's attention at a higher-up level that I was gay and I was forced to resign," added Tyrrell.

The Boy Scouts of America say it's within their first amendment rights to exclude openly homosexual persons from membership.

Watch an interview with Tyrrell HERE. 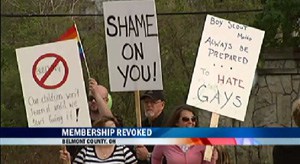 Supporters of Tyrrell held a protest outside the facility where meetings of the Cub Scout den are held, the Bridgeport Church of God:

Tyrrell said she doesn't feel that this is a good lesson for the boys, but leaders said there isn't anything they can do. They claim they would never have allowed her to become a den leader had they known of her sexual orientation a year ago. Even though they revoked her membership, local leaders said it in no way reflects how well she did with the children or how effective she was as a leader. They said it is solely based on her sexual orientation. 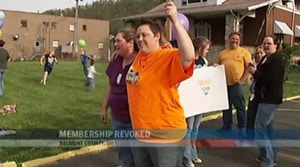 Writes Tyrrell in a post at GLAAD asking for support in a petition:

I am a devoted partner, mother, friend and community leader in Bridgeport, Ohio.  I’m also a former Tiger Cub den leader with the Boy Scouts of America (BSA).  I was recently removed from this volunteer position, and my membership was revoked after nearly a year of service – just because I happen to be gay. Shortly after registering my son for Cub Scouts, I was asked to assume the role of den leader and was persuaded by a platform of tolerance, acceptance and support. Throughout the year, my cubs performed volunteer service at a local soup kitchen, collected canned goods for area churches to distribute in food baskets, participated in bell-ringing for the Salvation Army, and, at the time of my removal, were working on a conservation project for a state park. My Tiger Cubs earned multiple Scout badges for service and skills, while learning and exercising the 12 Core Values of Scouting: citizenship, compassion, cooperation, courage, faith, health & fitness, honesty, perseverance, positive attitude, resourcefulness, respect, and responsibility.  The revocation of my membership came shortly after I was elected treasurer of my pack and uncovered some inconsistencies in the pack's finances. Within a week of reporting these findings to the council, I received notice that my membership had been revoked, based on my sexual orientation, citing that due to being gay, I did "not meet the high standards of membership that the BSA seeks".

There was an outcry of support for me by the parents of my Tiger Scouts, many of whom waited for hours to voice their concerns to members of the council and the pack's charter organization, but were turned away without the opportunity to do so.