Rev. Tim Clark of Seattle’s Our Lady of the Lake Catholic Church received a standing ovation from his congregation over the weekend when he announced it would not participate in a campaign to roll back the state's marriage equality law, the SeattlePI reports: 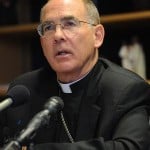 The parish became the sixth in Seattle to opt out of the petition drive for Referendum 74 that has been endorsed and foisted on parishes by Archbishop J. Peter Sartain (pictured).

“I am happy to report that Our Lady of the Lake parishoners have been overwhelmingly and, thus far, unanimously supportive of the decision I made NOT to gather signatures in support of this Referendum,” Clark wrote in response to an e-mail. “The standing ovation experienced during one of the Masses says less about me and much more about the health of this parish.  I only wished the archbishop could have experienced the sustained applause — the ‘sensus fidelium’ — of the people.  He needs to listen to this ‘voice.’ That is my prayer.”

If supporters collect 120,577 valid voter signatures by June 6, they will be able to block marriage equality from taking effect in Washington and put the measure on the ballot in November

Clark, whose announcement was in response to a letter from Sartain, added: “I deeply believe, and say this with boldness, that this approach is not in the mind of Christ.”

Previous Post: « Towleroad Guide to the Tube #1107
Next Post: Vatican Cracks Down on American Nuns for Not Being Anti-Gay Enough »