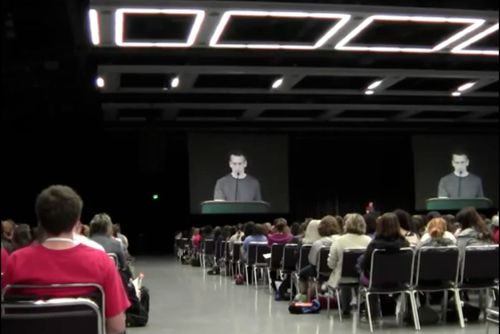 A great brouhaha is stirring in the nation's conservative publications over comments Dan Savage made two weeks ago while addressing the JEA/NSPA National High School Journalism Convention. The convention was entitled "Journalism On The Edge," which you'd think would prep participants for a certain amount of edginess in the presentations. Alas, the audience was not prepared for edginess. Savage's subject was to be bullying, and he got right to the point:

People are dying because people can't clear this one last hurdle. They can't get past this one last thing in the Bible about homosexuality.

Um, one other thing I wanna talk about is — [chuckles] — so, you can tell the Bible guys in the hall that they can come back now, because I'm done beating up the Bible. It's funny, as someone who's on the receiving end of beatings that are justified by the Bible, how pansy-assed some people react when you push back.

I apologize if I hurt anyone's feelings. But. I have a right to defend myself. And to point out the hypocrisy of people who justify anti-gay bigotry by pointing to the Bible, and insisting we must live by the code of Leviticus on this one issue and no other.

As Savage noted, Christian students in the thousands-strong audience fled from his address, first in a trickle, and then in a great flood. The exodus began right around the time Savage started talking about slavery. Very soon, the offended students were talking to the press. From the rightist rag Citizen Link:

A 17-year-old from California who was attending with half a dozen other students from her high school yearbook staff, was one of several students to walk out in the middle of Savage’s speech.

“The first thing he told the audience was, ‘I hope you’re all using birth control!’ ” she recalled. Then “he said there are people using the Bible as an excuse for gay bullying, because it says in Leviticus and Romans that being gay is wrong. Right after that, he said we can ignore all the ‘B.S.’ in the Bible.

“I was thinking, ‘This is not going a good direction at all,’ Then he started going off about the Bible. He said somehow the Bible was pro-slavery. I’m really shy. I’m not really someone to, like, stir up anything. But all of a sudden I just blurted out, ‘That’s bull!’ ”

As she and several other students walked out of the auditorium, Savage noticed them leaving and called them “pansies.”

The story has now been picked up by FOX News Radio, under the headline "Anti-Bullying Speaker Curses Christian Teens." Today, that article was one of the top links at Drudge Report, which suggests the story will get bigger very soon.

It's too bad the Christian kids left the hall. They're supposed to be journalists, and we in the journalism biz must often dirty our ears with others' distasteful utterances. While Savage might have profitably avoided the use of profanities (which, when used to describe allegedly sacred documents, tend to make believers less than receptive to whatever might come next), what he said was materially true, and good journalism students of any creed ought to know it. And inquisitive Christians also ought to know the standard argument against Dan's point: That Jesus's "new covenant" rendered the Old Testament's "ceremonial law" meaningless (making it okay for humans to eat shellfish and pork) but left in place the Old Testament's "moral laws," which include prohibitions against homosexuality. And smart people in general should know the counter-argument to that counter-argument, which is: Really? Stoning women to death isn't a moral issue?

That's where believers and doubters tend to part ways, which is a shame. Apparently these journalism students are too delicate to get even that far.

Watch the allegedly objectionable bits of Savage's address AFTER THE JUMP …

Previous Post: « Breitbart.com Dishonestly Edits Video; Congresswoman Receives Threats
Next Post: NEWS: Mitt Romney, Questions Of Color, And A Pastor Who May Not Understand The Purpose Of A Certain Sex Toy »