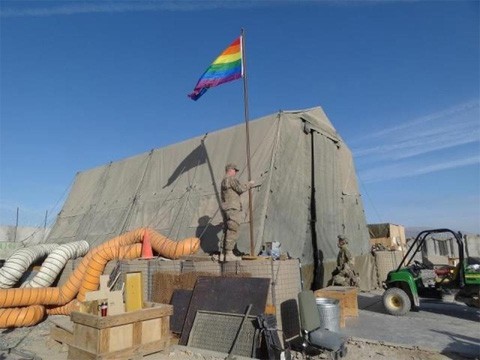 Hate group leader Tony Perkins of the Family Research Council has his homophobic panties in a bunch over a photo that appeared last week on the Wipeout Homophobia Facebook group of a soldier raising a Gay Pride flag at an Afghanistan base camp. The photograph was of the husband of a woman named Nicole Jodice. 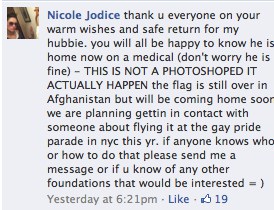 The Obama administration doesn't typically run its agenda up the flagpole, but at a military base in Afghanistan, the soldiers did it for them. There, in the dusty desert of war, an Army outpost saluted the colors of the homosexual lobby by flying a rainbow flag in place of Old Glory. Back home in America, a woman named Nicole Jodice posted the picture on Facebook, praising her husband for promoting, not the stars, but these stripes…

…Just three weeks after President Obama publicly apologized for offending the Islamic community with the accidental Koran burning, this base is pledging its allegiance to an act that is nearly as incendiary. Where is the concern now for angering Afghan Muslims, who vehemently oppose homosexuality? The issue is as much an issue of military security as it is of religious morality. After February's accident with the Korans, American lives were lost. What price will we pay because some want to use the military to show their gay pride?