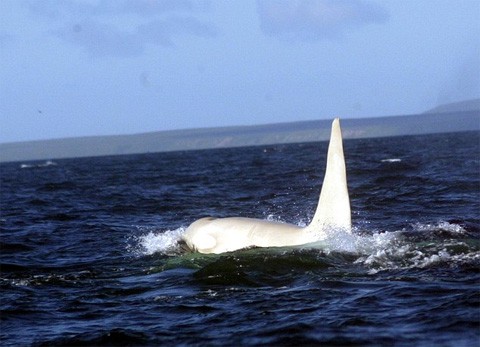 Researchers off the coast of Kamchatka in eastern Russia have photographed and filmed the only known mature male all-white Orca. They've nicknamed it 'Iceberg', the BBC reports:

White whales of various species are occasionally seen; but the only known white orcas have been young, including one with a rare genetic condition that died in a Canadian aquarium in 1972.

The sightings were made during a research cruise off Kamchatka by a group of Russian scientists and students, co-led by Erich Hoyt, the long-time orca scientist, conservationist and author who is now a senior research fellow with the Whale and Dolphin Conservation Society (WDCS).

"Iceberg seems to be fully socialised; we know that these fish-eating orcas stay with their mothers for life, and as far as we can see he's right behind his mother with presumably his brothers next to him," said Dr Hoyt.

The cause of his unusual pigmentation is not known. The captive white orca, Chima, suffered from Chediak-Higashi syndrome, a genetic condition that causes partial albinism as well as a number of medical complications.