The National Organization for Marriage says "criminal activity" has occurred regarding the publication of its 2008 1099 tax form on March 30 by the Human Rights Campaign, which sought to reveal how Mitt Romney tried to shuffle his anti-gay financial activities in support of NOM and Proposition 8 through an obscure Alabama PAC. 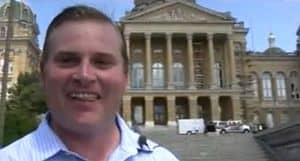 The document, which was published to Scribd by HRC, has now been deleted, and that, NOM President Brian Brown is freaking out that something criminal has occurred:

"They now realize that they have done something tremendously wrong here or they would not have removed the references," NOM President Brian Brown said today. "A felony has been committed and the Treasury Department must investigate who within the IRS has committed it, and whether people with the Obama Administration or the HRC are co-conspirators in the criminal release of our confidential tax return. We demand that federal authorities immediately launch an investigation into this crime. This is not a routine leak of some obscure document. We're talking about someone in the Obama Administration's IRS releasing to a group headed by President Obama's national co-chair the private tax return containing confidential donor information of their main opponent. This is reminiscent of Watergate, and the American people are entitled to know the truth of what has occurred."

The document, which contains the names of dozens of donors, is still available at the Huffington Post.

NOM is currently the subject of lawsuits in several states for trying to hide its donors. It recently lost another one in Maine.