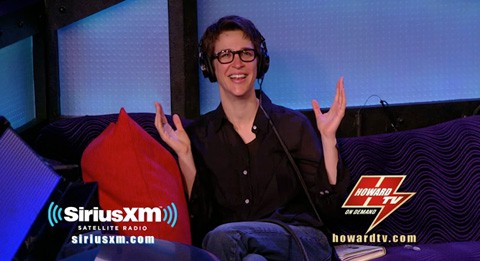 Rachel Maddow made an appearance last week on The Howard Stern show to talk about her new book Drift: The Unmooring of American Military Power. Stern also asked her about the Republican presidential nominees, and being a lesbian. Maddow told Stern that before she came out she was dating a "thuggish" kind of guy that her parents didn't really warm up to until she started coming out as a lesbian and then they were suddenly all about him.

Watch that clip and the full program, AFTER THE JUMP…

Stern also asked Maddow whether she had ever experienced “insertion from a man.”

Said Maddow: "I'm never going to tell you that."

Stern also asked  if she gets angry "when [she sees] guys like Rick Santorum so happy to bash gays and gay marriage, talk about how they're sinning" and "Michele Bachmann is running around with her husband saying, 'We've got to convert gay people.'”

Replied Maddow: “The comfort that I take in that is that they look ridiculous…They really look like…they look like a living embarrassing artifact of a way that people used to think.”

Previous Post: « Out Swedish Footballer Anton Hysén Sets His Hips in Motion for Dance Competition: VIDEO
Next Post: Romney to Travel Back in Time to Murder Liberal Versions of Himself: VIDEO »