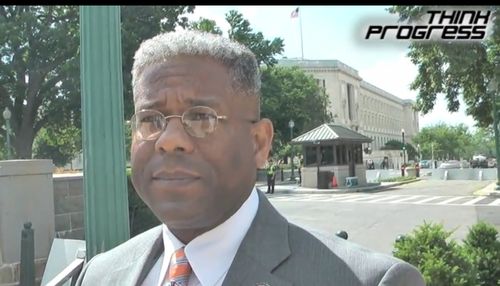 The freshman legislator from Florida's 22nd congressional district was approached in Washington on Thursday by Think Progress, and asked whether he might support legislation that would make it "illegal to hire or fire people because they're gay."

That don't happen out here in the United States of America.

Asked to clarify, he said:

Well, I don’t see that as being a big issue with small businesses. I sit on the Small Business Committee. You know what they’re concerned about? They’re concerned about onerous tax policy, regulatory policy, and lack of access to capital because Dodd-Frank is absolutely decimating small community banks.

… which doesn't clarify anything. Those small businesses inclined to fire a person based upon sexual orientation wouldn't be concerned with legislation curtailing that behavior, would they?

West always does this. When faced with a question of LGBT rights, he pretends that the question means something it doesn't, or imagines that the subject under discussion is something it isn't. When DADT was debated last year, he pretended its repeal would legalize sex in military barracks. Last August, he told Fort Lauderdale's Sun Sentinel that "sexuality is a behavior," and therefore mutable — and when asked if gays should therefore change their sexuality, he said this:

Watch West's brief conversation with Think Progress AFTER THE JUMP …