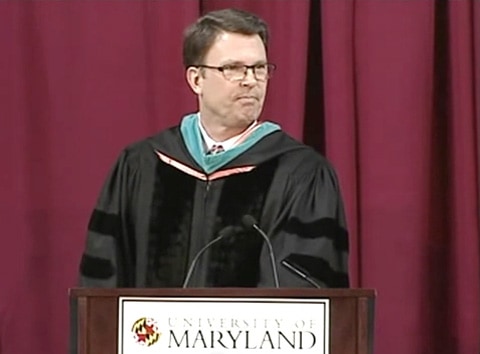 On May 20, John Berry, the out Director of the U.S. Office of Personnel and Management gave the commencement address at the University of Maryland. Berry told grads about the changing face of the LGBT rights movement, and  pioneering activist Frank Kameny, who was fired for his federal job for being gay.

In 1957 – not long before I was born – a man named Frank Kameny was fired from his Federal job, just for being gay. This was a man who fought his way across Europe in World War II, came home, got a Harvard Ph.D., and was told he was unfit to serve. In fact that every gay person was a security risk. He was called a criminal and a pervert by the head of the Civil Service – the precursor to the office I hold.

Frank fought back. He was the first American who did. All the way to the Supreme Court. He lost. But he persisted. He joined together with allies, and slowly – at times very slowly – he changed opinions and changed laws.

When I came out, my Dad asked me to never bring my partner to the house. This was hard because we were a close family, that gathered every Sunday for dinner, even after we'd all left home. Ten years later, when my partner was dying of AIDS, it was my father, a man who survived the Great Depression and Guadalcanal, who held him in his arms weeping, and saying "I love you like my own son."

Wounds do heal. Minds do change.

That is the value of truth. It lays a bedrock of certainty that the sand of half-truths can never rival. Be true to yourself and your values, because the world needs the whole you.

Watch (gay rights segment starts at 7:00), AFTER THE JUMP…