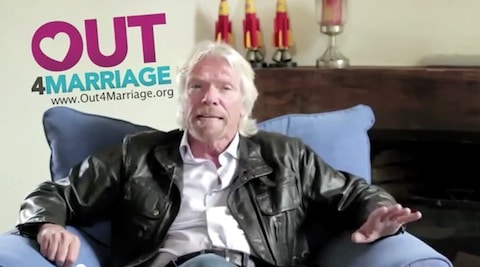 Sir Richard Branson, founder of the Virgin Group, has shot a video for the OUT4Marriage campaign for marriage equality in the UK.

"I'm Richard Branson, the Founder of the Virgin Group. For many years, I've been a supporter of gay rights around the world. Back in 1967 when we founded a charity called the Student Advisory Centre, the law was changed to make it legal to be gay in England and Wales. We took many calls from young people in the process of coming out, and we were able to offer some support and guidance. But these people were coming out into a world that still hugely discriminated against them because of the gender of the person they loved.

"Over the years, across the world, gay people have been given more and more rights. But in the UK, much of the US and many other countries, one key right is denied, the right for every couple in love to marry. Getting married myself and giving my daughter Holly away at her wedding last year, are among the proudest days of my life. Everybody should be able to experience those moments if they wish to do so, regardless of their sexuality.