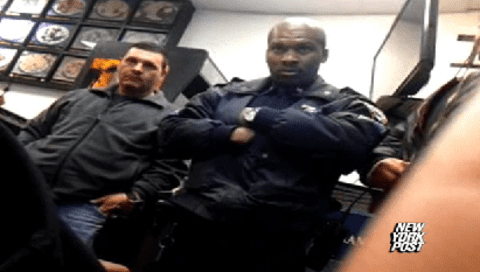 There’s nothing to make New York City residents feel safe quite like Sgt. Lesly Charles, an officer caught on camera threatening a man with his “long d-ck” after the man allegedly parked his car illegally.

The footage includes Charles berating a young man in the roadway near a silver BMW, telling him: “This is my street. All right? If you got to play tough, that’s your problem . . . I do whatever the f–k I want.”

A short time later, Charles followed the group into the nearby No. 1 Chinese Food restaurant, flanked by two plainclothes cops.

“Your pretty face — I like it very much. My d–k will go in your mouth and come out your ear. Don’t f–k with me. All right?”

After the target of his tirade insisted, “I didn’t do anything,” Charles retorted, “Listen to me. When you see me, you look the other way. Tell your boys, I don’t f–k around. All right?”

“I’ll take my gun and put it up your a– and then I’ll call your mother afterwards. You understand that?”

For good measure, the sergeant added: “And I’ll put your s–t in your own mouth.”

The man who shot the video was later arrested for disorderly conduct for not leaving the premises.

Asked about the incident, which is currently being investigated by the NYPD, Charles told the Post, “I’m just doing God’s work.” Nice.