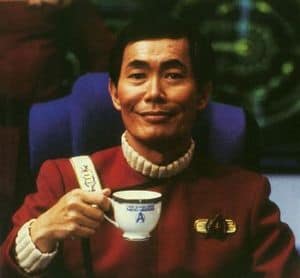 “I want to listen to what his concerns are," the gay, married actor said today. "I respect people’s right to their faith…However, we’re talking about civil law as opposed to religious law, and how religious faith or value should be written into a law that effects everyone.”

Explaining why he wants to sit down with Trump, Takei said, "He is an influential person. He effects the thinking of a lot of people…I think he’s an open minded fair minded person and certainly a savvy businessman."

The men agreed in March to have lunch in April, but the event never came to fruition.

Trump should really get on this; even if they don't reach a consensus on gay marriage. Takei is a funny man and a sci-fi icon. A lunch with him would for many people be a dream. Including me!