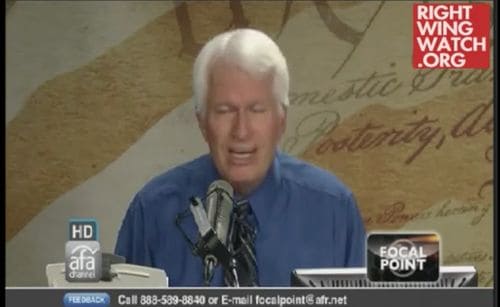 Jesus! Mitt Romney can't catch a break from anti-gay crazyperson Bryan Fischer! Two weeks ago, Fischer was leading the charge against Romney's newly-appointed spokesman Richard Grenell, claiming that hiring Grenell amounted to a "slap in the face" of all pro-family Americans. He also said that if Romney wanted to win the presidency in November, he'd "better start pandering in a big, fat hurry" to the the gay-hating Republican "base," and that he should begin by firing Richard Grenell.

Now we know what that was really all about. Bryan Fischer doesn't care who Mitt Romney hires; he's just looking for an excuse to bust some semi-moderate Mormon balls. Because now Grenell has been fired, and Fischer's still griping. His new line: Mitt Romney has proven that he's unfit to be president by taking Bryan Fischer's advice.

Does Fischer mean to imply that he'd have applauded Romney's stoutheartedness if Grenell'd kept his job?