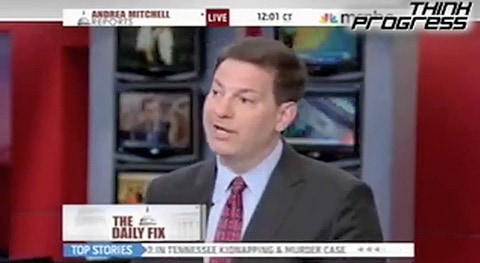 As noted this morning, the President is expected to speak to ABC News' Robin Roberts in an interview this afternoon. Pundits expect that it is to note the completion of his evolution on same-sex marriage, Think Progress reports:

"Every expectation that we will, within the next hour, be in a different world, where we will have a President of the United States who supports the legalization of gay marriage… The Vice President, I think, forced his hand. But even before the Vice President spoke on Meet The Press in favor of gay marriage, the President, I think, was headed in this direction even before the election. There was a lot of speculation he would wait until after he was reelected or lost, but I think the people around him all felt there was going to come a time where he needed to do this. It’s where everyone, or almost everyone, who works for him is. I think, and a lot of people think who have observed him over the years think, it is where his heart is. And I think when he does it – although there will be a lot of speculation with political implications – it’s just as likely to help him win reelection than hurt him."

Previous Post: « Will Dan Savage See the Light and Embrace Christ as His Savior?
Next Post: Romney Confirms Opposition to Same-Sex Marriage and Civil Unions »