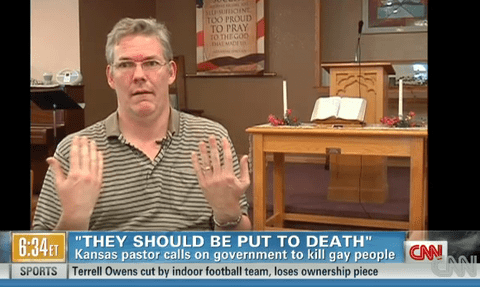 Curtis Knapp, the Kansas-based pastor who claimed the government should kill all gay people, sat down with CNN to plead his case, and most of his arguments are pretty predictable.

According to Knapp’s discriminatory logic, the government cracks down on pedophilia and incest, so LGBT people should be punished, as well.

“We punish pedophilia. We punish incest. We punish polygamy and various things. It’s only homosexuality that is lifted out as an exemption,” he said. He also said that he doesn’t actually believe gay people should be killed, only that we be “saved.”

But in a bizarre twist, Knapp told the cable news channel that George W. Bush was too tolerant of gay people, thus setting the stage for President Obama’s support for marriage equality. Are we talking about the same George W. Bush?

Watch Knapp’s remarks AFTER THE JUMP.