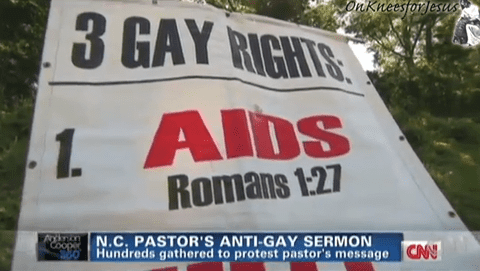 CNN tried to do a follow-up interview with Charles Worley, the North Carolina pastor who suggested letting LGBT people die in internment camps, but apparently Worley’s not interested in pleading his case – he just walked on by the cameras.

Meanwhile, as Worley hides out at his church, supporters and opponents alike have taken to the streets to voice their own opinions.

Watch the video AFTER THE JUMP to hear from both sides. And be sure to listen for the response from a man asked why he claims AIDS is Biblical retribution. Hint: it isn’t, and he knows it.