A masseur is suing John Travolta for $2 million, TMZ reports, alleging that Travolta groped him during a session: 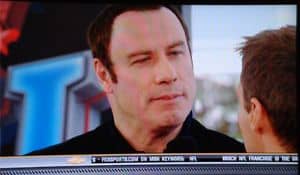 The masseur claims he told Travolta he did not have sex with his clients, but Travolta was undeterred, offering to do a "reverse massage," adding, "Come on dude, I'll jerk you off!!!"

In addition to specific sexual details about the encounter, the lawsuit also alleges that Travolta told the masseur "he got to where he was 'due to sexual favors he had performed when he was in his 'Welcome Back Kotter' days,' adding 'Hollywood is controlled by homosexual Jewish men who expect favors in return for sexual activity.'"

“This lawsuit is a complete fiction and fabrication. None of the events claimed in the suit ever occurred. The plaintiff, who refuses to give their name, knows that the suit is a baseless lie. It is for that reason that the plaintiff hasn’t been identified with a name even though it is required to do so. On the date when plaintiff claims John met him, John was not in California and it can be proved that he was on the East Coast. Plaintiff’s attorney has filed this suit to try and get his 15 minutes of fame. John intends to get this case thrown out and then he will sue the attorney and Plaintiff for malicious prosecution.”