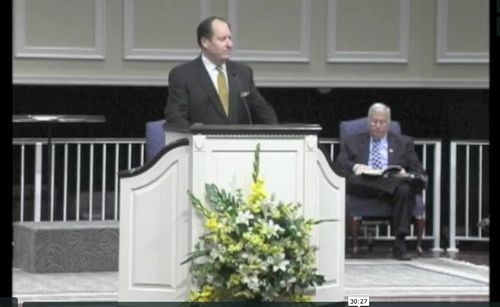 As Bill Clinton robocalls North Carolinians to explain the importance of civil unions to families, communities, and businesses, the pro-Amendment One people are getting weird.

One week ago today was the Sunday designated by North Carolinian homophobes as "Marriage Sunday" — a day when pastors would organize to inspire their flocks to cast votes against equality. At Beacon Baptist Church, which draws some 1,500 worshippers to praise each sabbath, Pastor Tim Rabon devoted his entire sermon to Amendment One. One of his remarks is getting special attention in the blogosphere:

Massachusetts, Connecticut, Iowa, New Hampshire, New York, Vermont, Washington, plus the District of Columbia, have already redefined marriage to include the union of any two people. May I just insert here: what is stopping them from refining marriage as between a person and a beast? We're not far from that.

But, really, if you're interested in hearing how homophobic North Carolinian Baptists discuss weighty matters in their natural habitats, it's worth listening to the whole sermon. Fascinating stuff. Example: Shortly after reading from Genesis, Rabon explains, somewhat gnomically, that the reason marriage is immutably between one man and one woman is that Jehovah created the institution on the sixth day of creation. Which sounds like the usual craziness — until you realize that he's predicating the Baptist argument for Amendment One on a literal reading of Genesis, and therefore on Young Earth Creationism. That and much more is available AFTER THE JUMP.

Meanwhile, a 44-year-old mother by the name of Heidi Thompson was arrested Wednesday on her way to her home in West End for stealing anti-Amendment One signs out of people's yards. From WRAL:

"I didn't feel like I was stealing signs at the time," she said. "I just looked at it as picking up trash along the side of the road."

Thompson was driving with her 13-year-old daughter at the time, and she bid the girl assist in the thievery. She's now been charged with contributing to the delinquency of a minor:

"I know it's making me look like a bad parent, but we've taught that it's not right for men to be married to men and women to be married to women, so we stopped and picked them up," Thompson said. "Had I known it would be such a political issue, I wouldn't have done it."

… There is nothing political about the charges, [said Pinehurst Police Chief Earl Chipps].

"We don't weigh any favoritism one way or another in an investigation. We look at the evidence," he said.

"I just think they're making a statement out me," she said.

NOTE: The sermon in the below video is now restricted and un-embeddable. You may still see it here.