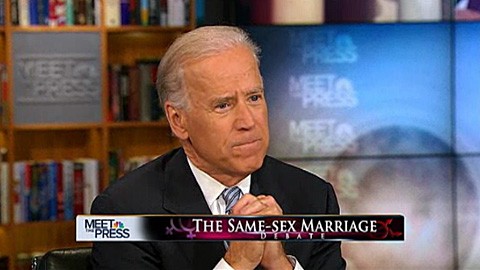 This morning on Meet The Press, in an interview with David Gregory, Vice President Joe Biden announced his support of marriage equality.

Watch Joe Biden on Meet The Press AFTER THE JUMP…

Here's a transcript of the relevant part of the interview:

Gregory: You write social policy. I'm curious. You know, the president has said that his views on gay marriage, on same sex marriage, have evolved. But he's opposed to it. You are opposed to it. Have your views evolved?

Biden: Look — I just think that, uh, the good news is that as more and more Americans come to understand what this is about, it's a simple proposition. Who do you love? Who do you love? And will you be loyal to the person you love? And that's what people are finding out. It's what all marriages, at their root, are about. Whether they're marriages of lesbians, or gay men, or heterosexuals.

That's what you believe now?

That's what I believe!

And you're comfortable with same sex marriage now?

In a second term, will this administration come out behind same sex marriage? The institution of marriage?

Well, the president continues to fight. Whether it's Don't Ask Don't Tell, or whether it is making sure, across the board, that you can't discriminate — look at the executive orders he's put in place. Any hospital that gets federal funding, which is almost all of them, they can't deny a partner from being able to have access to their partner [who's] ill, or making the call on whether or not they, you know … it's just, this is evolving. And by the way, my measure, David — and I take a look at when things really began to change, is when the social culture changes. I think Will and Grace probably did more to educate the American public than almost anything anybody's ever done so far.

And I think people fear that which is different. Now they're beginning to understand, they're beginning to understand that this — as a base! — I, uh, was speaking to a group of gay leaders in Los Angeles last, two weeks ago. And one gentleman looked at me in the question period and said, let me ask you, how do you feel about us? And I had just walked in to the backdoor of this gay couple and their, their two adopted — and I turned to the man who owned the house, and said: What did I do when I walked in? He said: You walked right to my children. They were seven and five, and giving you flowers. And I said, I wish every American could see the look of love those children have in their eyes for you guys, and they wouldn't have any doubt what this is about.

This is the kind of off-the-script vice-presidential headline-making that any administration can either hurry to embrace or else attempt to slink away from. Interestingly, the Obama administration seems to be doing both.

According to the Washington Post, a "Biden spokesperson" clarifies:

[The Vice President] was saying what the President has said previously — that committed and loving same-sex couples deserve the same rights and protections enjoyed by all Americans, and that we oppose any effort to rollback those rights.

What VP said-that all married couples should have exactly the same legal rights-is precisely POTUS's position.

Watch Joe Biden on Meet The Press AFTER THE JUMP…

Previous Post: « UPDATE: Men, Beasts, And Larceny: How The Other Side Is Gearing Up For Amendment One Vote (Video)
Next Post: Gay Cameroonian Refugee Dodges Deportation From UK, For Now »