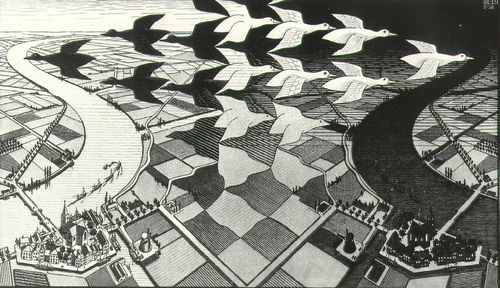 Bill Clinton hits the air in NC to decry Amendment One.

With just a little bit of Republican help, a civil unions bill squeezes through the House Finance Committee in Colorado.

Despite Scott Brown's claims to the contrary, Elizabeth Warren probably didn't ride her Native American cred to the upper echelons of academia. If she had, this guy would know about it.

Excellent Discover interview with physicist Roger Penrose. He's gotten a little flaky in the twilight of his career, but he's still one of the most compelling interviewees in science. Plus, he dishes about his fruitful, semi-accidental collaborations with MC Escher:

… In my second year as a graduate student at Cambridge, I attended the International Congress of Mathematicians in Amsterdam. I remember seeing one of the lecturers there I knew quite well, and he had this catalog. On the front of it was the Escher picture Day and Night ... I remember being intrigued by this, and I asked him where he got it. He said, “Oh, well, there’s an exhibition you might be interested in of some artist called Escher.” So I went and was very taken by these very weird and wonderful things that I’d never seen anything like. I decided to try and draw some impossible scenes myself and came up with this thing that’s referred to as a tri-bar. It’s a triangle that looks like a three-dimensional object, but actually it’s impossible for it to be three-dimensional. I showed it to my father and he worked out some impossible buildings and things. Then we published an article in the British Journal of Psychology on this stuff and acknowledged Escher.

Escher saw the article and was inspired by it?

He used two things from the article. One was the tri-bar, used in his lithograph called Waterfall. Another was the impossible staircase, which my father had worked on and designed. Escher used it inAscending and Descending, with monks going round and round the stairs. I met Escher once, and I gave him some tiles that will make a repeating pattern, but not until you’ve got 12 of them fitted together. He did this, and then he wrote to me and asked me how it was done—what was it based on? So I showed him a kind of bird shape that did this, and he incorporated it into what I believe is the last picture he ever produced, called Ghosts.

Researchers have concluded that up to 90 percent of students leaving school in major South East Asian cities are suffering from myopia — the fancy term for when things look fuzzy at a distance. According to Professor Ian Morgan, who conducted the study, the average used to be between 20 and 30 percent.

Morgan believes that the staggering increase in nearsightedness is the result of too much studying and homework, and not enough exposure to daylight.

Realizing its error, the Heartland Institute tries to make amends.

Courtesy of Buzzfeed: Eleven sounds you've got to hear before you die. For a sample, have a listen to a turtle making love to a shoe, AFTER THE JUMP. Ridiculously adorable, and adorably ridiculous.