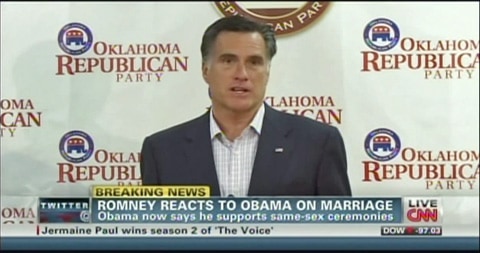 Adding to remarks in Denver prior to the Obama interview confirming his opposition to same-sex marriage and civil unions, Mitt Romney told press in Oklahoma later this afternoon that his views had not changed:

"My view is that marriage itself is a relationship between a man and a woman and that's my own preference. I know other people have differing views. This is a very tender and sensitive topic, as are many social issues, but I have the same view that I've had since running for office."