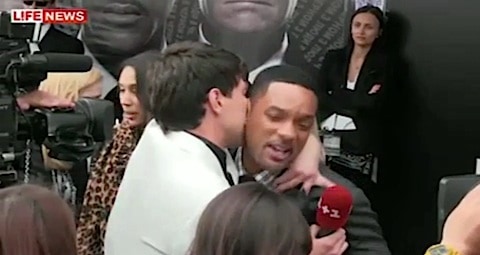 Will Smith was not happy to be the target of a Ukrainian reporter's kiss on the red carpet of Men in Black 3, TMZ reports:

The Ukrainian reporter tries to kiss Will on the lips on the red carpet and the actor angrily pushes him away and then backhands him across the face. You can clearly see that Will is incredibly pissed that the guy showed overt affection toward him.

After Will slaps the guy, Will says, "He's lucky I didn't sucker punch him."

We're told the dude who kissed Will is a television reporter who often kisses celebrities — it's his schtick.

In other news, Smith recently offered his support for Obama's endorsement of marriage equality, according to the AP:

The Hollywood actor says the question of whether gay people should be allowed to legally marry is “about semantics.” He told reporters in Berlin on Monday that “if anybody can find someone to love them and to help them through this difficult thing that we call life, I support that in any shape or form.” Still, Smith says the president’s support for gay marriage was a “brave” move in an election year.

Previous Post: « ‘One Million Moms’ Goes after The Gap for Its New Gay Ad
Next Post: Adam Lambert Performs ‘Never Close Our Eyes’, Talks About Being a ‘Gay Celebrity’ for Google Play: VIDEO »