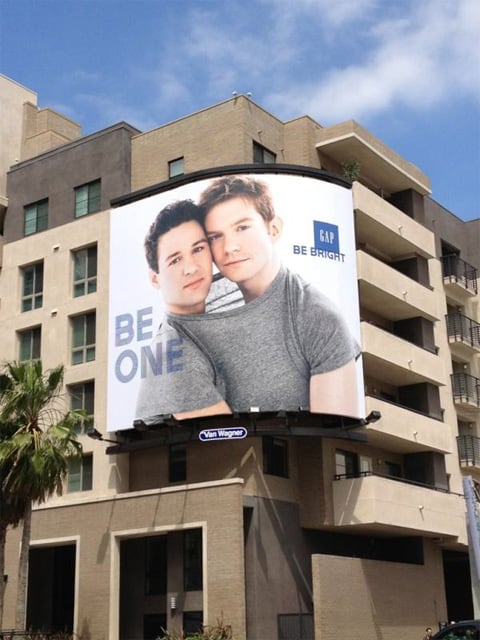 Claiming that its recent campaign against JC Penney over an image of lesbians in its catalog is having an effect, American Family Association subgroup One Million Moms is now going after The Gap for an ad featuring a gay couple.

Speaking of companies who are choosing to be politically correct instead of focusing on selling clothes; GAP is also guilty. In Los Angeles, CA, GAP has a billboard located downtown that reads: "GAP- BE BRIGHT- BE ONE" with two homosexual men pressed together under a shared t-shirt. They are hugging each other and facing the camera cheek-to-cheek. "BE ONE" is in large letters which emphasizes the same-sex relationship.

GAP Inc. Brands, including Old Navy, Banana Republic, Piperlime, and Athleta, does not deserve, nor will it get, money from conservative families across the country. Supporting GAP is not an option until they decide to remain neutral in the culture war. GAP needs to seriously consider how their immoral advertising affect the youth of our nation.

Christians should urge for the removal of GAP's offensive billboard in Los Angeles and any other city where it is located. GAP will also need to cancel any plans to use the "Be One" ad campaign elsewhere including store-front posters, its website, and in print magazine ads.

The group instructs its members to send the company the following action item:

As a parent and a member of OneMillionMoms.com, I am highly offended by your company's disrespect for the millions of parents whose children will be exposed to your latest "Be One" GAP billboard ad. Selling clothes has nothing to do with a person's sexual orientation. In attempting to be politically correct, you are offending a huge majority of your customers.

GAP Inc. Brands, including Old Navy, Banana Republic, Piperlime, and Athleta, does not deserve, nor will it get, my family's business as a result. I will not be able to support your corporation until you decide to remain neutral in the culture war. I implore you to consider how your immoral actions affect the youth of our nation.

Please order the removal of your offensive billboard in Los Angeles and any other city it is located. Also cancel any plans to use your "Be One" ad campaign elsewhere including store front posters, your website, and in print magazine ads.

The ad features Rory O'Malley (Tony nominee for The Book of Mormon) with his boyfriend, Gerold Schroeder