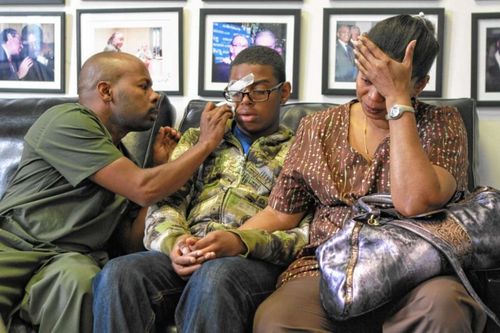 Kardin Ulysse, a teenager from Brooklyn, was attacked on June 5 in the cafeteria at Roy H. Mann Junior High School in Bergen Beach as bullies yelled anti-gay epithets. He is now blind in his left eye even after two surgeries, the NY Daily News reports:

“The doctor says he needs a transplant,” Pierre Ulysse said. “For me to send him to school with two eyes and come back with one eye is really absurd.

“I want the world to know about this,” he added.

Kardin, an eighth-grader, was set upon by a pair of seventh-graders who were calling him a “f—–g f—-t,” a “p—-,” a “transvestite” and “gay,” according to a Department of Education occurrence report.

While one schoolmate pinned the victim’s arms, the other rained punches on Kardin’s face, head and neck.

Kardin broke away and the fight continued in the cafeteria until school safety officers and school aides finally intervened. The boy’s family has retained lawyer Sanford Rubenstein, who will file a notice Tuesday to sue the city for $16 million for failing to properly supervise the students.

The two alleged bullies are minors. An upgrade of the charges to felony hate crimes is being investigated.

It's not the first time, Kardin told the paper:

Kardin, who now wears a bandage over his right eye, said he had informed a Roy H. Mann dean that he had been a victim of bullying at the school for some time. Last October, another thug attacked him and tried to steal his school lunch money.

Previous Post: « Gay Man Searched at London Airport on Suspicion of Pedophilia Because ‘He Had a Camera and a Boyfriend’
Next Post: Daniel Radcliffe as an Emotional, Table-Dancing Drunk: MUSIC VIDEO »