The Austalian Salvation Army is apologizing for an interview in which Major Andrew Craibe, Territorial Media Relations Director for the Southern Territory in Victoria told journalists Serena Ryan and Pete Dillon that gays deserve to be put to death, Truth Wins Out reports: 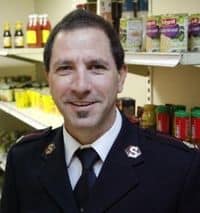 Ryan noted that the Salvation Army handbook cites Romans 1:18-32, a passage claiming that “God’s decree” is that homosexuals deserve death, and asked Craibe if the Salvation Army took that passage literally. Craibe replied in the affirmative, and continued to do so throughout the interview.

In response, Major Bruce Harmer, Salvation Army Communications and Public Relations Secretary for the Eastern Territory, issued a statement acknowledging that Craibe’s responses to Ryan and Dillon were a “miscommunication” that resulted in a misrepresentation of the group’s official teaching. The statement read, in part:

“The Salvation Army sincerely apologises to all members of the GLBT community and to all our clients, employees, volunteers and those who are part of our faith communities for the offence caused by this miscommunication.”