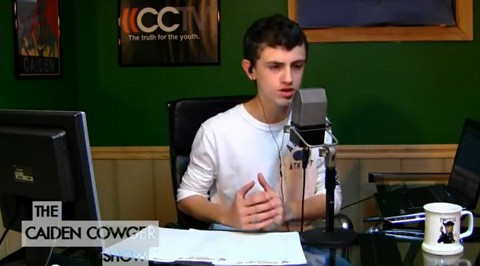 Caiden Cowger, a teen talk show host in West Virginia who has obviously paid a lot of attention to Bryan Fischer is getting attention for a new video in which he rants against the “perversion” of homosexuality and says that Obama is encouraging kids to decide to be gay.

“I see younger people that is turning out to be homosexuals…we’ve got about 30 teenagers in this county that I’m at that are homosexuals and it is sickening…I knew these teenagers when they were in elementary school…they were not homosexuals. They just decided all of a sudden – I think I’m going to be gay. Why they are becoming homosexuals is because they are being encouraged…President Obama. It’s all right, it’s okay you were born that way.”

The New Civil Rights Movement notes that Cowger has already been noticed by a few conservative Republicans:

Cowger has written a book, Being A Young Conservative, which has notes of support from Rudy Giuliani and Glenn Beck’s chief of staff. Cowger’s radio show is on Facebook, and he has a website for his radio show. Cowger has become so famous he has interviewed Herman Cain, and West Virginia candidate for the U.S. Senate John Raise, adding that he “spoke at the Annual Harrison County Lincoln Day Dinner. He spoke following Senate Candidate John Raese, with Candidate for Governor Bill Maloney, and Candidate for Congress David McKinley.”