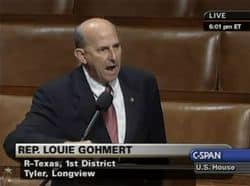 "What this would do is give special employment benefits and protections based upon their sexual behavior and orientation. What do you see as the outcome of this? I mean, are you concerned increasingly that this is a way to essentially punish religious freedom in the business environment, in the business sector?"

"It continues to be part of this administration’s ongoing war on religion, on particularly Judeo-Christian values. But of course this is one that even is extremely contrary to the Muslim religion as well. I mean, Islam, Judaism, although there are plenty of people in Judaism and Christianity who think despite the plumbing that God created, that as the Iowa Supreme Court said, there is no biological evidence of a preference for a man and a woman being married as opposed to a man and a man…It also means that Christian schools will be forced to hire openly homosexual individuals, and it’s kind of tough to teach biblical principles in Romans 1 in a school if you are of the persuasion of being homosexual."

Previous Post: « Betty White Talks About Her Meeting with Obama, Gay Marriage
Next Post: The Artist is Present »