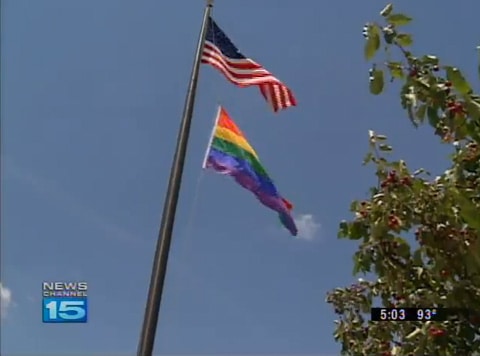 Raising a rainbow flag is a much different act in Fort Wayne, Indiana than it is in San Francisco.

The General Motors plant there is hoisting the Pride flag for one week in honor of its LGBT employees and is getting noticed by a lot of people.

Watch WANE's report with supportive interviews, AFTER THE JUMP…

You can see the Facebook responses to WANE's report about the flag below.

GM's statement about the flag:

GM had this to say about putting up the Gay Pride flag "Recently, Fort Wayne Assembly plant leadership decided to permanently move a POW flag from a pole in front of its administration building to the facility's primary flag and truck display along Interstate 69. This gave the plant an opportunity to fly other flags, which include the Indiana state flag, the UAW flag, and any of the flags representing GM's official Employee Resource Groups. Currently the GM PLUS rainbow flag is flying for one week in support of Pride month. It's our hope that ongoing support of our employees will foster constructive dialogue on the importance of diversity at GM."

The Prisoners of War and Missing in Action flag is flying in a more prominent location in front of GM by I-69.