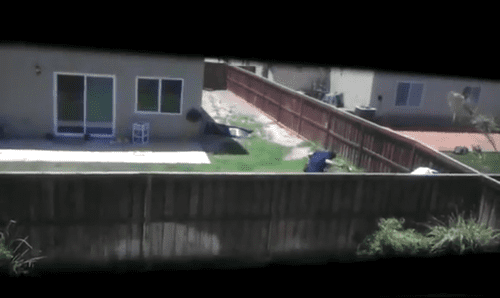 (UPDATE: Anthony Sanchez was arrested Friday afternoon. Thanks to Kris et. al. for pointing this out.)

In the below video, see Anthony Sanchez, of California's Imperial Valley, beating his 10-year-old step-son with a belt, apparently because the boy has difficulty catching a baseball. The footage was shot by Sanchez's neighbor, Oscar Lopez, who rather stirringly disrupts the domestic violence in the video's final seconds.

Sanchez’s attorney, Ryan Childers, made clear that Sanchez has not been charged with anything, nor are any charges pending, he said. He is cooperating with authorities but at this time there’s no reason for him to turn himself in, he said.

“What’s happening in the context of the video itself is certainly disturbing,” Childers said in response to the video. “We recognize that. But we need to let the Sheriff’s Office have time to fully investigate the incident so all the facts can come to light.”

Sanchez contacted Childers’ office Thursday morning and has since canceled a business trip out of town to cooperate with the investigation, Childers said. His wife and children, including the stepson reportedly in the video, are on a previously planned trip to Alabama, where the wife is from. Sanchez was set to head there as well after a business meeting in Los Angeles, but those plans have been put on hold.

If sheriff’s officials want the child to be brought back to Imperial County, the family will cooperate, but so far there is no indication that that will be necessary, Childers said. He has made contact with the police in Alabama to work with local authorities.

“Our position at this point is we want to let the sheriff’s department do their job, let all the facts come to light, and then we may be in a position to address things at that point,” Childers said.

Watch the video AFTER THE JUMP …