Yesterday, after ABC News reported that Senator Marco Rubio (R-FL) was not being vetted as a potential pick for Romney's running mate, the Romney campaign made a rare disclosure that Rubio was, in fact, being vetted for the job. 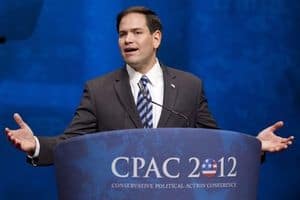 Christianity Today later in the day posted a long interview with Rubio about his faith and issues related to it. One of them was same-sex marriage:

The debate is about what society should tolerate, and what society should allow our laws to be. I believe marriage is a unique and specific institution that is the result of thousands of years of wisdom, which concluded that the ideal — not the only way but certainly the ideal — situation to raise children to become productive and healthy humans is in a home with a father and mother married to each other. Does that mean people who are not in that circumstance cannot be successful? Of course not.

It’s not a discriminatory thing. I’m not angry at anyone because of it, but I also have to be honest about what I believe marriage should be in our laws.

In May, Rubio reiterated that he opposes gay marriage for religious reasons, but that the decision should be left to the states. He also knocked Obama for using the issue as a political tool.