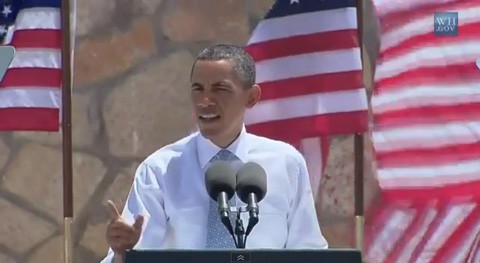 Obama is now part of the latest pop song meme to sweep the web.

According to Gawker, "Nineteen-year-old Fadi Saleh, who goes by 'Barackdubs' on YouTube, partnered with MTV Act to create this masterful dub."

Saying he was more determined than he was in his 2008 presidential run, Obama faulted his Republican rivals for their economic policies, saying the party is too eager to throw "sand in the gears" in Congress and would "take us back to the exact same policies that got us into this mess in the first place."

At a different fundraising event earlier in the night, Clinton took his comments further, saying a win for the Republican in November would be "calamitous for our country and the world."

Highlights of those speeches, and Carly Rae Obama, AFTER THE JUMP…