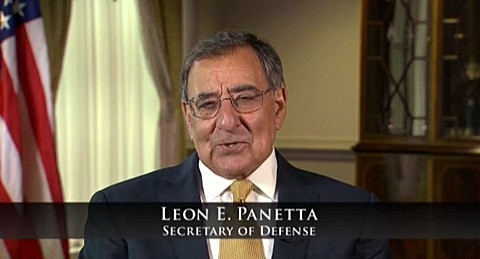 Says Panetta in the video:

As we recognize Pride month, I want to personally thank all of our gay and lesbian service members, LGBT civilians, and their families for their dedicated service to our country.

Before the repeal of “Don’t Ask, Don’t Tell,” you faithfully served your country with professionalism and courage. And just like your fellow service members, you put your country before yourself.

And now—after repeal, you can be proud of serving your country, and be proud of who you are when in uniform.

The pursuit of equality is fundamental to the American story. The successful repeal of “Don’t Ask, Don’t Tell” proved to the Nation that just like the country we defend, we share different backgrounds, different values, and different beliefs—but together, we are the greatest military force in the world.

It also reminds us that integrity and respect remain the cornerstones of our military culture. The Army, Navy, Marine Corps and Air Force implemented the repeal with a focus on respect and individual dignity.

As Secretary of Defense, I am very proud of how we implemented repeal. Going forward, I remain committed to removing as many barriers as possible to make America’s military a model of equal opportunity, to ensure all who are qualified can serve in America’s military, and to give every man and woman in uniform the opportunity to rise to their highest potential.

Diversity is one of our greatest strengths. During Pride month—and every month—let us celebrate our rich diversity and renew our enduring commitment to equality for all.

Said Josh Seefried, Co-Director of OutServe: “This historic video confirms the message that the military supports all service members and civilian employees, based on their merit. This is a tribute to our core military values: respect and integrity. If there is any remaining doubt that the military has executed DADT repeal with excellence, and that LGBT people are serving our country with honor, Secretary Panetta has firmly put that to rest.  This is leadership directly from the top.”