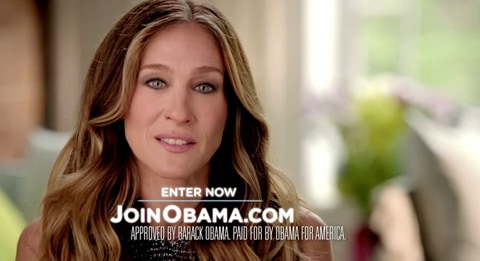 Sarah Jessica Parker debuted in a new campaign ad during last night's MTV Movie Awards plugging a chance for dinner at her house with the President and Michelle Obama.

Says Parker in the spot: "The guy who ended the war in Iraq, the guy who says you should be able to marry anyone you want, the guy who created four million new jobs. That guy – President Obama – and his wife Michelle are coming to my house for dinner on June 14th."

The RNC is blasting the ads:

"There couldn't be a better demonstration of this president's misplaced priorities than a glitzy fundraising video release on the same day that marked more unemployed Americans," RNC Chairman Reince Priebus said in a statement.

The national group released a web video on Monday that played the Wintour video alongside economic figures, including the unemployment rate among women, Hispanics, African Americans and young people.