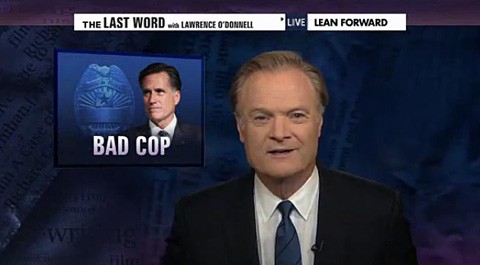 On last night's The Last Word, Lawrence O'Donnell reported that Mitt Romney used to brag about impersonating a police officer:

When Mitt Romney wasn't gay bashing kids whose hair he didn't like, Mitt Romney 's other favorite sick thing to do was to impersonate a police officer. In an exclusive article just released tonight by the National Memo, details emerge of a Mitt Romney who as a college freshman at Stanford University allegedly admitted to fellow dorm mates that he sometimes disguised himself as a police officer, and laid out on his bed was a Michigan state trooper's uniform. One of the people who saw the uniform said he told us that he had gotten the uniform from his father, George Romney , then the governor of Michigan, whose security detail was staffed by uniform troopers. he told us that he was using it to pull over drivers on the road. 'He also had a red flashing light that he would attach to the top of his white rambler. We thought it was all pretty weird….'