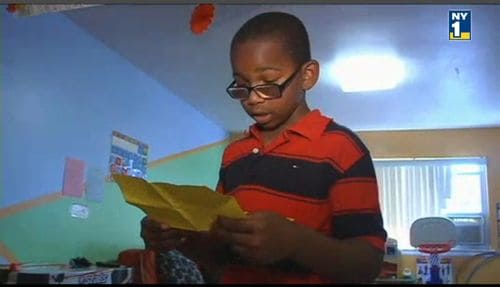 At PS 195, in the Rosedale neighborhood of Queens, New York, 5th grader Kameron Slade did not deliver a speech supporting marriage equality in a school-wide speech contest on Friday. He did not deliver that speech even though he had written it, and even though he had previously won a qualifying in-class speech contest and been told he could speak to the school-wide assembly on any subject he wished. From NY1:

Kameron's mother said he was told to choose any topic, so he chose same-sex marriage. But on Wednesday, the principal said he should write another speech or be removed from the contest.

"She said that people have different opinions on it and that some parents may not want their children to learn about this type of topic," Kameron said.

Kameron's speech calls for acceptance and tolerance. It describes his mother's explanation of the issue and his impression of his mother's friends who are gay.

"They seemed happy," he said. "Best of all, they seemed to love each other. The only difference was that there were two moms instead of a mother and a father."

And open up they have. After the story of Slade's speech-that-wasn't broke late last week, notices were sent to the parents of PS 195 informing them that Slade would deliver his speech in a "special assembly" on Monday. Hear the student discuss his brush with censorship here.