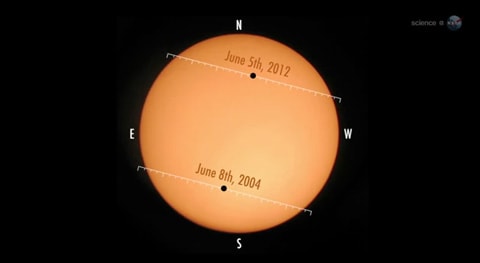 Venus will cross the sun today, which it did in 2004, though it won't happen again for a long time.

It will begin at 3:06 p.m. Pacific Daylight Time, and hit the center of its journey at 6:25 p.m. The sun sets in Los Angeles at 8:02 p.m., but in points west — such as Alaska, Hawaii, Australia, eastern Asia, and most of Europe — the show will go on for two more hours. (The transit will occur on Wednesday for points west of the International Date Line.)

Do not look at the sun directly. Use a pair of cinoculars to project the sun onto a piece of paper, or if you can find a projected image of the sun on something else, look for a tiny dot. That would be Venus. Some places, like planetariums are selling special glasses. No doubt there will be some spectacular photos shot this year.

This will not happen again until 2117.

Watch NASA's video on the transit, AFTER THE JUMP…