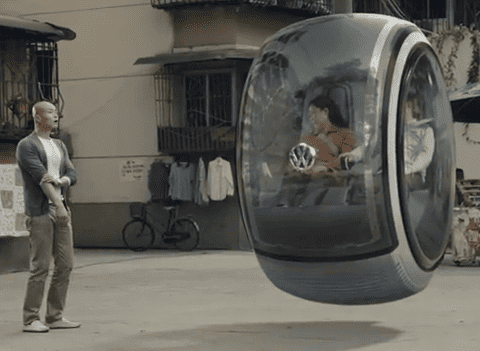 Volkswagen in China today announced the winner of its year-long The People's Car Project contest: a student named Wang Jia who turned in the design for an hypothetical auto that uses magnets to "hover" above the ground.

Scientific American walks us through how it works:

The imaginary car stays aloft with the aid of magnetic levitation, much the way some maglev trains travel along special rails using electromagnetic suspension. (Other maglev trains use electromagnetic forces for propulsion without actually lifting the train off the ground.) The Shanghai Maglev Train has been ferrying passengers since 2004 on a 30-kilometer line between Pudong International Airport and the city’s outskirts at speeds of up to 430 kilometers per hour. Magnets on board and in the track lift the train between eight and 12 millimeters, depending on how much electrical current is used.

What keeps maglev vehicles from gaining widespread use is the need to set up an infrastructure of electromagnetic rails and roads. In their video, Volkswagen designers envision a scenario where magnetic iron rock or ore [underground] help create the car’s levitation; alternatively, the minerals could be mined and mixed in with the tarmac.

Using a small model of the car, VW created a video of Jia's parents "driving" the hovercraft around their hometown, Chengdu. Though such a creation would not be available for years — or, possibly, ever — it's always nice to dream, and brings us one step closer to flying cars.