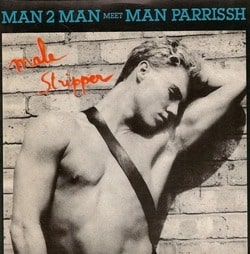 With all the hoopla over Magic Mike and its nearly $40 million box office haul, Forrest Wickman at Slate takes a look at the history of male strippers. Apparently that history is short:

While musclemen have been paid for popping their pecs and otherwise showing off their bodies since at least the late 19th century, it’s only in the ’70s that stripping became a co-ed profession.
…
Gay strip shows sprouted up around the same time. By 1976 the Gaiety Theatre in Times Square featured men stripping for the entertainment of other men.

Unlike the shows oriented toward women, the Gaiety shows regularly featured full frontal nudity on stage. Still, gay shows were otherwise quite similar to their straight counterparts, though there was more likely to be drag and other gender-play.

It wasn't long until male strippers started popping up in pop culture, featuring in long-gone television shows and made-for-tv movies. And now they're making millions at the box office. Male strippers sure have grown!