Happy Bastille Day! If you didn't watch the Tour de France this morning (if only movie-watching gave you glutes like that!) may I suggest another more cinematic way to celebrate our friends the French today? The French were instrumental in the birth of cinema so it's mandatory to pay homage once in awhile. 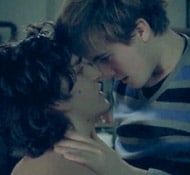 If you're staying in looking for movie options, Netflix has a wide range of Gallic movies available on Instant Watch including a number of gay interest features.

You can't go wrong with: Francois Ozon's POTICHE a very funny 70s kitsch-fest with Catherine Deneuve; last year's acclaimed transgendered drama Tomboy; Andre Techine's THE WITNESSES about the early days of the AIDS crisis; Jaques Demy's musical THE YOUNG GIRLS OF ROCHEFORT with Deneuve, Francoise Dorleac (Deneuve's late sister) and the one and only Gene Kelly who is currently getting the Centennial treatment here in NYC; the original LA CAGE AUX FOLLES (which begat the stage musical which begat The Birdcage which begat many farcical 'gays pretending to be straight' scenes in lesser movies); or Christophe Honore's polysexual musical LOVE SONGS (pictured) with a super hot cast including the dishevelled ubiquitous Louis Garrell, always welcome sex kitten Ludivine Sagnier and infinitely crush-worthy Grégoire Leprince-Ringuet; and that's just a handful of movie-watching options.

But above all else if you're a Francophile, run out to see Benoît Jacquot's FAREWELL MY QUEEN, a starry sapphic  retelling of the Marie Antoinette story which has just opened in select cities. 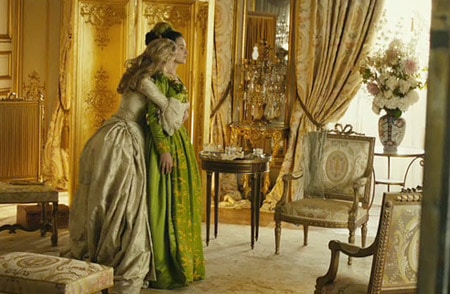 Sofia Coppola's Marie Antoinette (2006) was really into the pastries but this queen is hungrier for a certain Duchess. MORE AFTER THE JUMP

Diane Kruger (Inglourious Basterds) plays the troubled big-spending queen, Léa Seydoux (Mission Impossible – Ghost Protocol), the film's actual lead, is her bosomy devoted servant Madame Laborde, and Virginia Ledoyen (8 Women) is the Queen's Object of Affection, the Duchess de Polignac. The French people were so unhappy with this rumored affair that the ostensibly powerless Duchess was fairly high on the list of the 286 heads demanded for the guillotine! Jacquot clues you in early that he means to tell the famous story differently. For one, it's told "backstage" through the stressful lives of the servants. Consider it the French Revolution: Downton Abbey Edition… without Maggie Smith or the jokes. 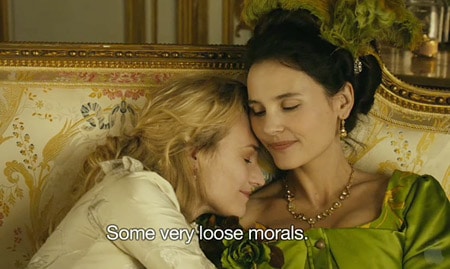 It begins on July 14th, 1789 on the fatefully violent day that will become "Bastille Day" though the Royal Court and their massive entourage of servants won't understand what's happening until the news trickles over to them in the country. This Revoluton will not be televised; Jacquot wisely never jumps over to Paris for history lessons but keeps the focus tight on Lamborde's journey as she's drawn closer and closer into the Duchess & Queen's tragic orbit. The movie is immediately unglamourous and alarmingly modern (without the gorgeously stylized anachronisms of Coppola's version). In the very first moments Laborde wakes with an itchy arm from mosquito bites, is taunted by a fellow servant with a dead rat, and scolded by her superior for arriving to see the Queen with a dirty dress. In brief, this is not your typically fussy costume drama. The 100 minute running time, the shortest of any Marie Antoinette feature that I've personally seen, is another example of the film's bracing immediacy.

Farewell my Queen takes place over a few short days and each morning Lamborde is awakened more violently as the threats from Paris escalate. Late in the film, after an innocuous fade to black she jolts suddenly awake gasping and grasping her neck as if she's just lost her own head to the blade. She has possibly lost her head, albeit not literally. And she may have also lost her heart, too. It's a credit to Seydoux that she manages to keep you guessing and interested in what the mysteriously solitary Lamborde is feeling even though her character is a self described "no one". Is her devotion to the Queen your garden variety Stockholm Syndrome or is there something deeper at work? The psychologically knotty climax is both unthinkably heartless and suffused with an elegant gallows romanticism as the three central women become inextricably fused together even as they're scattering away from their home. 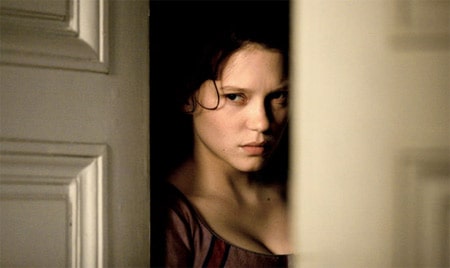 There are numerous reasons why the Marie Antoinette story has fascinated artists and storytellers for centuries now. From the Court's commitment to theatrical flamboyance with a blind eye to the consequent suffering of the masses (modern pop culture echos were seen as recently as The Hunger Games this spring), to the complexity of the Queen's lonely gilded cage tragedy played against the backdrop of epic messy violent history. One could argue that the now mythic story is super relevant all over again in this era of rampant socioeconomic injustice and the angry gap between the 1 and 99%.

P.S. if you have no time for the movies this weekend, do something to celebrate the French. The least you could do is watch the haunting Les Miserables trailer again! Anne Hathaway's choked up musicality is thrilling and a reminder that theatrically galvanizing French suffering didn't end with Marie Antoinette's head in a basket. If Hathaway is crying this hard in early 2013 it'll be from Oscar night joy.