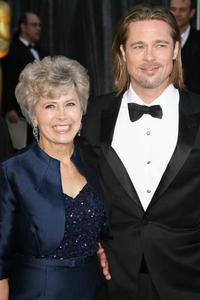 Conservative website WorldNetDaily has seized on news that Jane Pitt, mother of actor Brad, penned an op-ed praising Mitt Romney and blasting President Obama for being a "liberal who supports the killing of unborn babies and same-sex marriage." And, yes, they're covering the story in grand fashion, claiming the media "slant" has worked people into a frenzy and describing Mrs. Pitt's tone as "laden with heaviness of heart."

WND spoke briefly with Pitt and asked about the media assault against her for her comments as a private citizen supporting Romney. With inflections in her voice that conveyed fear and despair, she quietly and politely said she was not interested in talking to anyone in the media about the incident.

When she was told WND supported her right to speak her mind and is appalled by the threats against her life, Pitt expressed gratitude to WND for being one of the few news agencies doing so.

Even her thank you, however, was said in a subdued manner laden with heaviness of heart.

They also claim "Pitt has every reason to be frightened," because some random wackos wrote violent tweets and the "mainstream media have painted her in a vilifying light."

It's unclear what media they're talking about, since Jane Pitt's letter seems like a blip when compared to the international sensation that is Doug Pitt.