Frank Bruni takes on Michele Bachmann's so-called 'Christian' faith in a searing piece in the NYT: 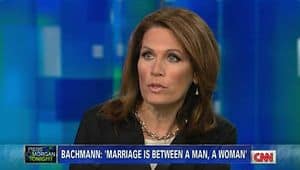 After questioning her attacks on Huma Abedin, an aide to Secretary of State Hillary Clinton, by suggesting she was part of the Muslim Brotherhood infiltrating America, and her previous attacks on vaccines, Bruni launches into Bachmann's attacks on Obama and gays:

Does it encourage gratuitously divisive condemnations of Barack Obama as “anti-American,” one of many incendiary phrases in her attacks against him in 2008? And does it compel a war against homosexuality waged with the language and illogic she uses?

She has said that gay men and lesbians are dysfunctional products of abuse and agents of “sexual anarchy,” and when the singer and songwriter Melissa Etheridge was battling breast cancer years ago, Bachmann helpfully chimed in: “This may be an opportunity for her now to be open to some spiritual things, now that she is suffering with that physical disease. She is a lesbian.”

Bachmann’s concept of Christian love brims with hate, and she has a deep satchel of stones to throw. From what kind of messiah did she learn that?

Much more at the Times. A must-read.