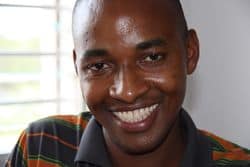 According to Julius Lumanyika Kyaruzi, the coordinator at CHRP where Mjomba was working as the Training Coordinator (HIV and injecting drug use), Mjomba was found dead at his home. Julius told Identity Kenya that a neighbour  'noticed a foul smell' from Mjomba's house and called the police. This could mean Mjomba could have been dead for days. His body is at Muhimbili Mortuary awaiting an autopsy to determine the cause of death. The police investigations are also being conducted though initial reports point he may have been murdered.