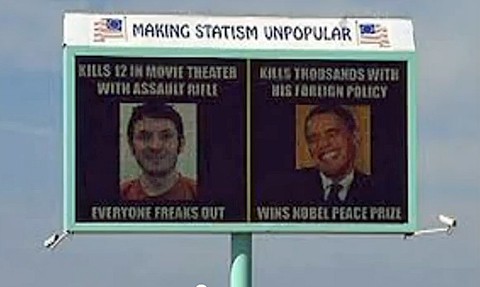 An electronic billboard in Caldwell, Idaho is making headlines, the Statesman reports:

An electronic board on Franklin Road in Caldwell juxtaposes photos of James Holmes, accused of killing 12 in an Aurora, Colo., movie theater last week, with President Obama. About Holmes, it says: “Kills 12 in a movie theater with assault rifle, everyone freaks out.” About Obama: “Kills thousands with foreign policy, wins Nobel Peace Prize.”

What’s the point? Obama broke his promise to bring the troops home and many young Americans have died, said Maurice Clements, who is helping keep alive the provocative libertarian tradition of the late Ralph Smeed, whose billboard (now electronic) is a Caldwell landmark. “We’re all outraged over that killing in Aurora, Colo., but we’re not outraged over the boys killed in Afghanistan,” Clements said of public sentiment.

What connects Holmes and Obama? Clements said he’s just comparing the way society reacts. “We’re not saying that Obama is a lunatic,” he said.