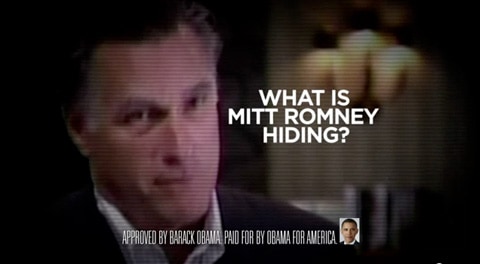 A new ad set to air in Pennsylvania as Romney visits hits Mitt on his hesitancy to release his tax returns, CNN reports:

“Mitt Romney has used every trick in the book” when it comes to his financial portfolio, the ad’s narrator says. It points to reports of Romney’s offshore investments in places considered to be tax havens for Americans.

Obama’s re-election team and national Democrats have inundated Romney with attacks in recent weeks over his finances, calling on the presumptive GOP presidential nominee to make public additional tax documents to answer any lingering questions.

Romney has released his 2010 tax return and an estimate for 2011. He has pledged to release the full return once it's available.

In related news, a Romney attack ad featuring Obama's rendition of Al Green's lyrics "I'm so in love with you" was taken down by YouTube on copyright infringement.

Responding to the YouTube take-down, Romney's campaign said they were prepared to defend the video.

"Our use was 100% proper, under fair use, and we plan to defend ourselves," a campaign official said.